As part of the activities of the National Peace Operations Training School of Uruguay (ENOPU), on Friday, November 17, 2017, the course “Protection of Civilians” was completed.

A total of 93 students participated in the course, with the presence of two students from the Federative Republic of Brazil, one student from the United Mexican States, the rest from the Army, National Navy, Ministry of National Defense and National Police. 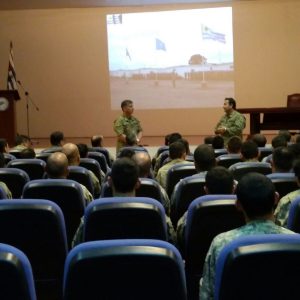 The topics developed in class were focused on promoting in the students the interest and critical sense on the different aspects related to the “Protection of Civilians in the framework of Peacekeeping Operations”: the actors, the risks, the threats, the legal framework, child protection, sexual abuse, the tasks to protect the civilian population, ensuring, in addition, the legitimacy and credibility of the mission.

As usual, it ended with a practical exercise applying the knowledge acquired for the Identification of the different Scenarios, their risks and the tactical planning for the materialization of the integral concept of Protection of Civilians as well as a series of conferences.

Standing out are the conferences of Colonel Luis Coitiño, Cathedra Coordinator, and General Ricardo Fernández. The latter gave the students their vast knowledge of the subject and his experience in PKO. Particularly the lessons learned as Battalion Commander in the Democratic Republic of the Congo during the Kinshasa crisis for which he was awarded the “Encomienda de Número de la Orden del Merito Civil”, awarded by the Kingdom of Spain. 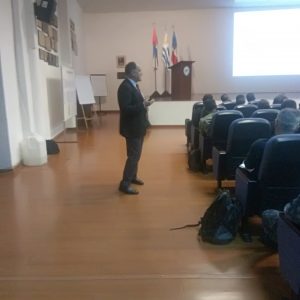 Completing in this way the priority instruction for the contingent that will be deployed to the DRC in 2018 and other students who obtained the necessary knowledge on the integrated protection civilians.